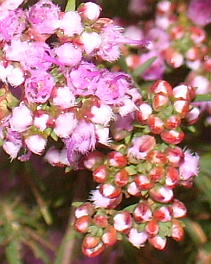 Meaning of name: Verticordia is an epithet of Venus, the Turner of Hearts, to whom the myrtle was sacred (the plant is a myrtle and was so named on account of the beauty of the flowers). Densiflora is from the Latin words densus, meaning thick, crowded, dense, and flos or floris, meaning flower.

Remarks: An erect shrub to 1 metre tall. The pink flowers are produced from November to January.