Meaning of name: Kunzea was named after Gustav Kunze (1793 – 1851), professor of botany, entomologist and physician. Glabrescens is from the Latin terms glaber, meaning without hair, and escens, meaning -ish. It refers to the leaves being hairless or becoming so with age.

Distribution: Occurs on the coastal plain from Gingin south to Albany. It can be found in winter-wet depressions and bordering watercourses.

Description: An erect shrub to 6 metres tall. The pale flowers are produced in a globular head from September – November.

Notes: The common name of Spearwood refers to the long, straight stems.

The suburb of Spearwood derives its name from Kunzea ericifolia (the name by which this plant was originally known), which is a common shrub in the area. When the area was subdivided by real estate entrepeneur James Morrison in 1897 he used the name Spearwood Gardens Estate, the first time the name was used. The Spearwood area soon became one of Perth’s major market gardening areas. 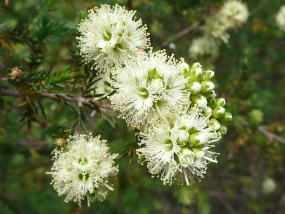 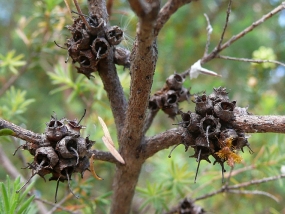